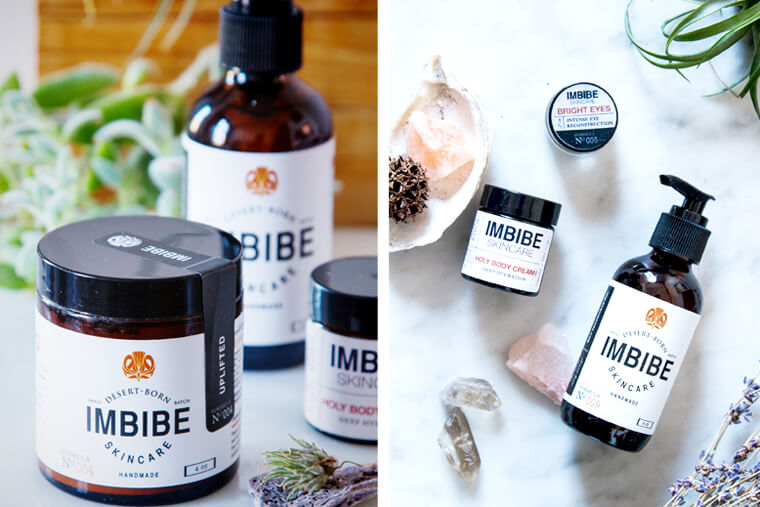 Over the years, I have become increasingly more passionate in the area of natural beauty and have really worked on simplifying my beauty regime and the products I use on my body. It is no easy feat, but with time and a little experimenting, I’ve managed to whittle down my routine to a few basics. I’ve been receiving a lot of questions recently from readers asking what types of products I use and thought I would start a new series on the blog dedicated to sharing my favorite natural beauty products and skincare companies with you all.

I have a confession. I have struggled with acne and dry skin since my early teens. Even as an adult, I suffer from the occasional flare-up. With my wedding fast approaching (June 21st!! Ahhhhh!!), I was searching frantically to put an end to my skin woes.

Over the winter, I was introduced to Imbibe Skincare. Their products are organic, handmade and wildcrafted. The lovely founders, Alicia and Audrey, were inspired by the beauty of the Utah desert to create a skincare line using ingredients that are found in the wild. They practice sustainable and eco-friendly methods by sourcing their ingredients within the U.S. and in their backyard. That’s pretty cool if you ask me.

After using their products, I have noticed a total transformation in the overall appearance of my skin. My skin is clearer, firmer and smoother. Other people have complimented me on my glow too, which is a great feeling! I look forward to washing and moisturizing my face now because I know this stuff does just the trick to truly nourish my skin. I also feel like I’m being pampered at a spa every morning and night – the products are that luxurious.

I use this before bed to remove makeup and grime from my face. Just wet the face and gently massage for 30 seconds and remove with a clean wash cloth by gently scrubbing the face. I’ll do a post soon about the oil cleansing method and the benefits. I’ve been doing it the last few years and I’m a huge fan! I also like using a small dab of the oil as a moisturizer in the morning after wetting my face with cool water and before putting on makeup. It leaves a dewy appearance which lasts all day.

I use this after washing my face with the Perfect 9 oil by placing a small amount of cream in my hand and rubbing it on my face. It gives a slight tingly sensation which is very pleasant and soothing. The cream also smells amazing!

Even though I’m new to the eye cream world, this is a must-try in my book. It tingles the skin and instantly brightens the appearance of the eye area.

I look forward to trying some of their other products and sharing my thoughts with you!

Find something you’re interested in trying out? Go to Imbibe Skincare and use the code ‘figgyandsprout’ at checkout to receive 10% off your order! 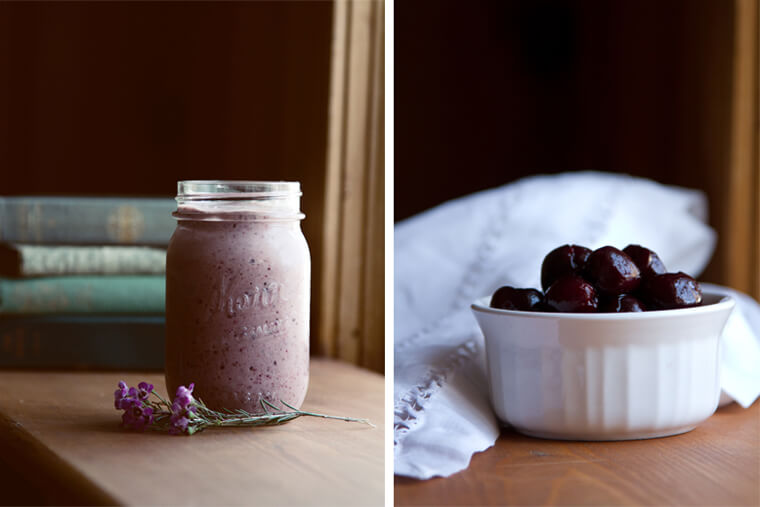 You know what, friends? It looks like Spring has finally arrived in NYC! In fact, there have been some pretty hot days here already. One way I combat the heat is with a cold smoothie. This one has been a favorite of mine for a while now.

Cherry season is right around the corner, so keep this recipe close when the time hits! Feel free to use frozen cherries until then. Cherries are packed with antioxidants and offer many health benefits. They help support healthy sleep, help lower blood pressure, reduce inflammation in the body and also aid in the recovery of muscles post-workout.

You’ll love how creamy, sweet and slightly tart this smoothie is. Kind of makes me want one right now… another one, that is.

Note: Also delicious with a tablespoon of raw cacao for a chocolatey treat :) 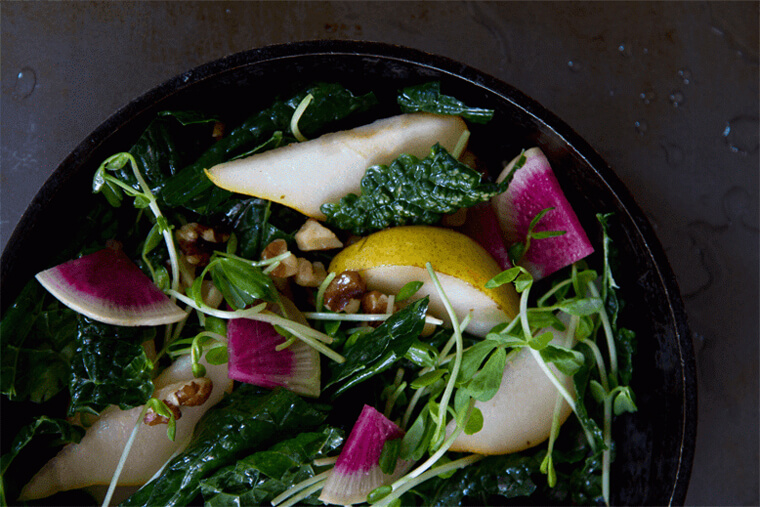 Three years ago today, I posted my very first recipe on this blog. What started as a creative outlet to share my knowledge of nutrition and vegan recipes, has turned into something greater than I could have ever anticipated. I’ve found something I truly love doing – sharing with you! I have become connected with some of the most amazing people passionate about food, health, fitness, business and community. I’ve met other ladies doing this crazy food blogging thing and they are some of the sweetest and most driven people I’ve ever met.

Thank you to everyone who has encouraged me along the way, and especially you, my readers. I am indebted to everyone who has left comments or made a recipe – thank you for being a part of this! I am so grateful to each and every person who has come alongside me on this journey.

I’m bursting with ideas of new things to do and try. Though I haven’t been posting regularly, things are about to change! I have big plans in store.

I also want to thank you all for the overwhelming response from my last post. Your kind and supportive words mean the world to me during this time of healing. I will get you up to speed on my recovery in a future post.

Now, on to the recipe!

Today I’m sharing with you a salad. Since the first recipe I shared with you was a salad, I thought it would be fitting to celebrate this anniversary with Spring fare. This is not just any ole salad, but a Kale Salad with Watermelon Radish and Pear!

Back in early March, my sister and I went home to Iowa to meet our new nephew, who very well could be the cutest little fella around. When we weren’t snuggling with the baby or oohing over his every move, we were eating. After visiting the local natural food store, I tossed this beauty together. It was a big hit!

Look forward to many more recipes coming your way from this photoshoot session! 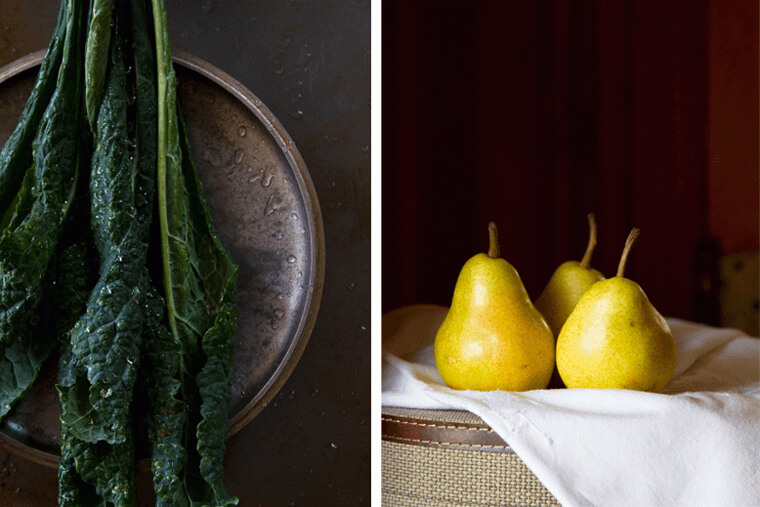 My Boobs Are Trying to Kill Me

On December 23rd, 2014, I received the dreaded phone call. “You have breast cancer.”

How could that be? I eat well, I exercise regularly, I don’t smoke and I rarely drink. Most importantly, I have no family history. I could simply not understand why this was happening.

Last winter I was experiencing extreme tenderness in both of my breasts which was at times downright painful. One day while showering, I felt a lump under my arm. I went to a doctor straight away to get it checked out. The physician said it was nothing to worry about – I just had dense breast tissue and the pain was caused by fluctuating hormone levels during my cycle. Without any testing or exams, he sent me on my way. I should have felt relief from hearing this news, but something just didn’t seem right.

It wasn’t until I went in for my gynecological visit in August that I had a follow-up about the lump under my arm. She told me the same things as the other doctor – “You’re a healthy 27 year old with no family history of breast cancer. You just have dense breasts. Also, cancer doesn’t hurt. You’re fine.” For peace of mind, she referred me to a specialist in the city for an ultrasound and biopsy.

The results of the biopsy and imaging came back inconclusive. They couldn’t tell me what is was or wasn’t. I decided to get yet another opinion on this mystery lump. At another hospital, I had several more biopsies performed, numerous ultrasounds, mammograms and a MRI.

When the results were in, I was at home with family in Iowa for the holidays. When the nurse called me on the phone, I could tell by the tone of her voice it wasn’t good. “Katherine, I’m very sorry for relaying this information to you over the phone. But the labs came in.. they came back positive.”

I was in shock. Deep emotional shock.

Before I even had time to react, I was asking questions. What are my options? Will I need a lumpectomy? What about a mastectomy? Will I need radiation? Chemotherapy? What are the next steps? I wanted all the answers.

My mind was racing with fear, but also confusion. I was told numerous times I had nothing to worry about. It’s nothing. It was too much to take in and I broke down. Crying for the unknown, crying for the amount of strength and courage I would need to get through this.

After getting off the phone, I had the unbearable task of telling my husband. Oh, I almost forgot to tell you… Gavin and I are married! We were married 10 days prior to receiving this unfortunate news. Wanna talk about the worst possible wedding and Christmas present? Yeah, it’s got to be cancer.

If there’s one thing that has kept me strong during this time, besides a solid support system, it has to be humor and seeing the bright side. In the moments of my diagnosis, I knew I had to remain positive. I wanted to be like one of those people on Ellen whose devastating occurrence brought change, life-changing change!! I’m going to make something of this cancer. I’m going to use my voice to spread the message for early detection, but also for prevention. I’m going to be the winner of this battle, because I’m going to be a guest on The Ellen DeGeneres Show and cancer is not invited.*

*Though I haven’t been invited to be on her show (yet), here’s to hoping! And if you’re reading, Ellen, I love you!